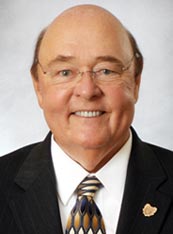 C. Dan Joyner, a 1959 Furman University graduate and one of Greenville’s most prominent business leaders, died Sunday, Jan. 8, after a brief illness.

Joyner was chairman and CEO of Prudential C. Dan Joyner Co., one of the Upstate’s largest real estate firms. He also gave a lifetime of outstanding service to his alma mater, and was widely known as one of Furman’s biggest fans.

“All of us at Furman are going to miss Dan Joyner more than we can say,” Furman president Rod Smolla said. “He was a proud graduate of the university and was among Furman’s greatest supporters, whether he was serving on the Board of Trustees or following the Paladin athletic teams.

“But his influence obviously went far beyond the Furman campus, and there is no question that the Greenville community is a better place for Dan having lived and worked here. For that, we were as proud of him as he was of Furman. Our sincere condolences go out to Dan’s wife, Kat, and the rest of his family.”

Joyner was born in Greenville on August 6, 1937, and earned a bachelor’s degree in business administration and political science from Furman in 1959. He was a cheerleader and president of the student body and was voted “Student of the Year.” He was elected to Who’s Who Among Students in American Colleges and Universities and to Quaternion, the select men’s leadership society.

After three years in the U.S. Army with the Counter Intelligence Corps, he returned to his hometown. Known for his energy, enthusiasm and friendly nature, he became a leader in the Upstate real estate community as the founder and president of Prudential C. Dan Joyner Co. REALTORS. He went on to serve as regional vice president and president of the South Carolina Association of REALTORS and as a national director of the National Association of Realtors (N.A.R.). He was one of 50 people selected by N.A.R. to receive a Distinguished Service Award.

Joyner once said, “I’d find time for Furman University before anything else,” and indeed, he was one of the university’s most ardent supporters and benefactors. He served several terms on the Board of Trustees during the presidencies of John Johns, David Shi and Rod Smolla, and he was particularly devoted to the athletics program. 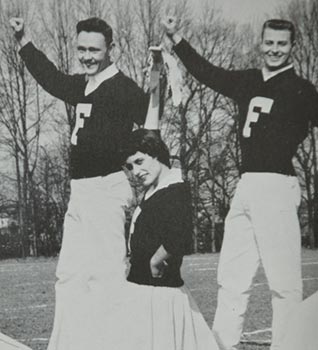 Joyner (far left), shown here in the 1958 Bonhomie, was one of Furman’s greatest cheerleaders, both literally and figuratively.

He was vice chair of the trustees’ Athletics Committee and was president of the Paladin Club, the program’s fundraising arm, for three years. He was instrumental in the successful effort to bring Joe Williams to Furman as basketball coach in the early 1970s and in the construction of Paladin Stadium on campus in the early 1980s. More recently he chaired the committee that worked to improve and renovate seating for basketball in Timmons Arena. The C. Dan Joyner ’59 Family Athletic Scholarship is awarded annually to a Furman student-athlete with financial need. In 1986 he was elected to the Furman Athletic Hall of Fame, and he received the Distinguished Service Award from the Southern Conference in 2007-08.

“C. Dan Joyner has been an icon for Furman athletics for decades, and we could not have had a better one,” said Gary Clark, director of athletics. “He was part of the bedrock support of the university, and his consistent optimism and can-do attitude allowed us to accomplish many things that otherwise would have been extremely difficult, such as the construction of Paladin Stadium and making improvements to Timmons Arena.

“He played such a leadership role for us and in the Greenville community.  A person of his caliber is truly unique and we are all fortunate and better for having known him and his wonderful family.”

He also served as president of the Furman Alumni Association and was a member of the Planned Giving Advisory Council, Heritage Society and Richard Furman Society. The porch at the David E. Shi Center for Sustainability at Furman is named in honor of Joyner and his wife, Katherine Poole Joyner ’60. Furman presented him its Alumni Service Award in 1967.