University Center to be named for family of Furman alumnus, trustee David Trone JUNE 22, 2012
by Vince Moore, Director of News and Media Relations 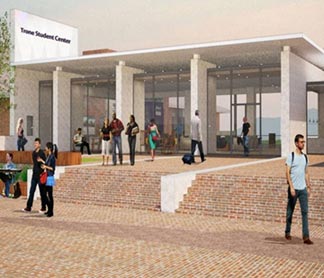 GREENVILLE, S.C.—Furman University officials have announced that the school’s University Center will be named for the family of Furman alumnus and trustee David Trone.

Trone, a 1977 Furman graduate, and his wife, June, provided the $3.5 million naming gift anonymously last fall.  The facility is currently undergoing a $6.75 million renovation and expansion geared toward making it a more central part of student life.

The redesigned Trone Student Center will include new spaces for student clubs and organizations, expanded social and dining areas, and a two-story, glassed-in lobby that will overlook a lakeside courtyard for performances, festivals and other major events.

“During many visits to Furman to see our daughter Julia (a 2012 graduate), it became clear that the University Center needed changes to be more of a central gathering place for the student body,” Trone said.  “President Rod Smolla was clear on this priority, and so June and I wanted to make it happen for future generations of students.”

As part of the redesign, the offices of International Education and Study Away, Internships and Undergraduate Research, and the (Lilly) Center for Vocational Reflection will move into the building.

Trone is owner and president of Total Wine & More, a company he started with his brother, Robert, in 1991. The company operates 81 Wine superstores in 14 states, and is the largest independent retailer of wine in the country.

After graduating from Furman, Trone earned his Master of Business Administration degree from the Wharton School at the University of Pennsylvania. In addition to serving as a member of Furman’s Board of Trustees, he serves on the Wharton Entrepreneurial Advisory Board and on The Bullis School Board of Trustees in Potomac, Md.  He and his wife have four children, and reside in Potomac, Md.

More information about the Trone Student Center renovation can be found online.