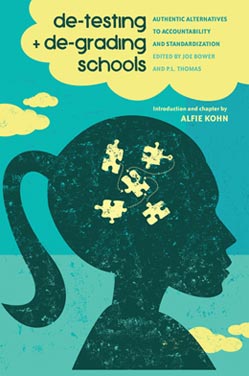 The book, a collection of essays co-edited by Thomas and Canadian educator Joe Bower and published by Peter Lang USA, looks at a century of education and education reform along with the last three decades of high-stakes testing and accountability to show the failure of testing and grading.

“Education has a steadfast commitment to testing and grading despite decades of research, theory, and philosophy that reveal the corrosive consequences of both testing and grading within an education system designed to support human agency and democratic principles,” says Thomas.

He is a column editor for the English Journal, a publication of the National Council of Teachers of English, and series editor for Critical Literacy Teaching Series: Challenging Authors and Genres (Sense Publishers), in which he authored the first volume—Challenging Genres: Comics and Graphic Novels. He has written commentaries for the Washington Post, The New York Times, The Guardian, Education Week, The State, and The Greenville News.