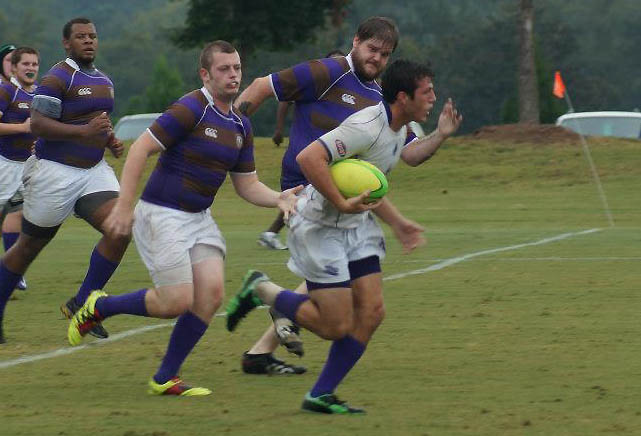 The Furman men’s rugby team scored early and often during an 87-3 win over Western Carolina Saturday at Roberts Field.

Played before a Family Weekend crowd, Nick Rossano, the first recipient of the Furman Rugby Fund Scholarship program, notched the first try eight minutes into the game.  From there, the forward dominated Catamounts had no answer for the dynamic Paladin backline.

Led by Austin Armor (freshman), Turner Morsches (sophomore), Connor Wilson (freshman) and Zach Roberts (a high school senior who will enroll at Furman next fall), the Paladin backline blistered  the WCU team, seeming to score at will.

“WCU has traditionally played a real forward-oriented game,” said Furman Coach John Roberts.  “Our plan was to spread the field.  I know WCU did not travel with their best side, and I am looking forward to a more competitive game against them in the spring.”

“We have a lot of new forwards and they are a bit hesitant at the tackle point,” said Roberts. “They lack aggressiveness. Hopefully that will come with confidence. But we must do a better job.”

The Paladins will host Davidson College at noon, Saturday at Roberts Field.