Pushing the boundaries of solar energy 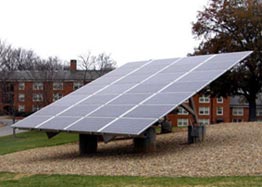 Furman began installing energy-producing solar panels on its campus more than a decade ago. But the university’s solar energy push has hit a wall, reaching a state limit that prevents it from installing more solar to heat and light campus buildings. The State newspaper in Columbia reported on how Furman, which is well-known for its green campus initiatives, is one of the first—and most visible—examples of how the state’s limit on sun power stands to affect solar energy expansion across South Carolina.