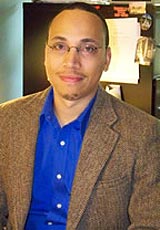 Furman religion professor Roger Sneed was quoted in a Los Angeles Times article about the recent passage of the gay marriage law in Maryland.  Sneed commented about the fact that support for same-sex marriage is weak among African Americans in Maryland, who make up almost 30% of the state’s population.

Sneed, who joined the Furman faculty in 2007, is a graduate of the University of Tulsa.  He has a M.Div. degree from Emory University and a Ph.D. from Vanderbilt University.  His research interests include African American religious thought and traditions, religion and sexuality, and religion and cultural studies.