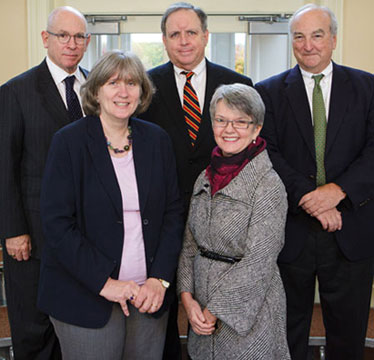 GREENVILLE, S.C.—The Furman University Board of Trustees unanimously approved a wide-ranging strategic plan to guide the university for the next decade, and welcomed five new members to the board during its fall meeting this past weekend.

The strategic plan, Vision 2020, articulates the university’s governing values and principles.  A major focus of the plan is to align Furman’s mission with its resources, and some of its primary goals include reaffirming and extending Furman’s commitment to academic excellence, strengthening the student experience inside and outside the classroom (including developing and implementing a student life master plan for facilities), deepening the university’s commitment to a broadly-defined diversity, making a greater investment in athletics and related sport and recreation programs, and building partnerships with the community.

The trustees’ approval came a year after the panel had passed a resolution charging the administration with developing a plan for presentation this year.

The five new Furman trustees who joined the board are Jolley Bruce Christman of Philadelphia, Pa; Douglas K. Freeman of Jacksonville, Fla.; E. Erwin Maddrey, II of Greenville; Ronald A. Malone of Travelers Rest; and Kathleen C. McKinney of Greenville.

Freeman (2003-09) and McKinney (2002-10) have previously been Furman trustees, and McKinney served as chair of the board her final two years.

Christman, a Greenville native, is founder of Research for Action, Inc., a Philadelphia-based, non-profit organization engaged in education research and evaluation in urban school districts.  Currently, she consults with foundations, school districts and non-profits to plan their strategic direction and assess the impact of their efforts.  She serves on the board of the Jolley Foundation in Greenville and the Fleisher Art Memorial in Philadelphia.  She is a graduate of Randolph-Macon Woman’s College and is immediate past president of its Board of Trustees.  She holds a Ph.D. in educational administration from the University of Pennsylvania, where she has been an associate faculty member since 1990.

Freeman, a 1972 Furman graduate who earned an MBA at the University of South Carolina, is executive vice president and chief corporate banking executive for BankAtlantic in Ft. Lauderdale, Fla.  He has also served as president of Bank of America’s Consumer Finance Group, and as chair and CEO of NetBank, the largest independent Internet-only retail bank.  In addition to serving on the board, he has been a member of Furman’s Advisory Council and Admissions Network.   He currently serves as co-chair of the Because Furman Matters fundraising campaign.

Maddrey is president of Maddrey & Associates, an investment management firm in Greenville.  He co-founded Delta Woodside Industries and served as its CEO from 1983 to 2000.  He currently serves on the Board of Directors of the South Carolina Governor’s School for the Arts Foundation, Upstate Forever, Public Education Partners, Ten at the Top, Palmetto Project, Independent Colleges & Universities of South Carolina, and The University Center of Greenville.  Maddrey is a graduate of Davidson College and earned an MBA degree from the University of North Carolina at Chapel Hill.

Malone has been chairman of the board of Gentiva Health Services since 2002 and served as chief executive officer from 2002 through 2008. He joined Gentiva in 2000 as executive vice president of the nursing division and was later named president of the home health division. A 1981 Furman graduate, Malone is a member of the university’s Advisory Council executive committee and is co-chair of the Because Furman Matters fundraising campaign.

McKinney, who has more than 32 years experience as bond counsel in the public finance and economic development sectors, is an attorney with Haynsworth Sinkler Boyd, P.A., in Greenville.  She was recently appointed as an Independent Director by the FHLBanks Office of Finance, and is the immediate past president of the National Association of Bond Lawyers, where she continues to serve on the board and executive committee.  In addition to serving as a trustee, she has been president of the Furman Advisory Council and currently serves on the Campaign Advisory Board.  She is a graduate of the University of South Carolina and USC Law School.

The new trustees, who were elected at the board’s winter meeting in February, began their service on July 1 and serve three-year, renewable terms.  Furman’s board consists of 36 members, plus the trustees emeriti.