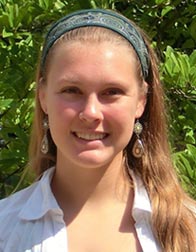 Furman University junior Elisabeth Schlaudt has been named a 2013 Udall Scholar, one of the nation’s most prestigious undergraduate awards for students pursuing careers in environmental fields.

Schlaudt, from Greenville, was one of 50 students selected for the award by the Morris K. Udall and Stewart L. Udall Foundation. The 50 honorees represent 43 colleges and universities in the U.S.

A graduate of Wade Hampton High School, Schlaudt is majoring in earth and environmental sciences at Furman. She plans to pursue a Ph.D. in hydrogeology with a focus on watershed management. Her career goal is to secure a position that allows her to maintain an active role in field research while also having the opportunity to shape management policies.

The daughter of Paula Schmietendorf and Roy Schlaudt of Greenville, she is a Furman Hollingsworth fellow, a member of Phi Eta Sigma (national scholastic honor society), and recipient of numerous awards and scholarships. She is part of Furman’s Environmental Action Group, has served as coordinator of Furman’s biodiesel facility, and has taken part in symposia, conferences, research and internships with an environmental focus. A research internship in 2011/2012 allowed her to study the role of particulate iron in South Carolina stream systems. She presented her research to the Southeast Geological Society of America in spring 2012.

A 14-member independent review committee chose this year’s group of scholars after examining their leadership potential and academic achievements in addition to their commitment to careers in environmental or health care areas or in Native American/Alaska Native tribal public policy.

Each scholarship provides up to $5,000 for the student’s junior or senior year. The program has helped 1,364 Udall Scholars since the first awards in 1996.

The 2013 Udall Scholars will assemble Aug. 7-11 in Tucson, Ariz., where they will receive their awards and meet policymakers and community leaders in environmental fields, tribal health care and governance.

The Udall Foundation is an independent federal agency that was established by Congress to provide federally funded scholarships for college students. The foundation is dedicated in part to educating future generations in how to preserve and protect their national heritage.