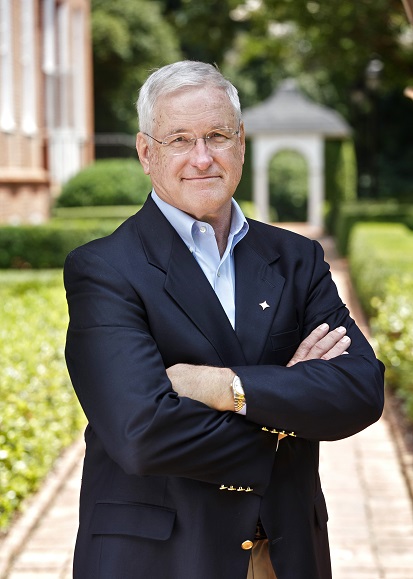 Interim President Carl Kohrt ’65 began his Furman experience in football pads and cleats. And when he took the mantle of leadership this July, his self-described “Put me in, Coach!” attitude quickly became his approach to the presidency.

On July 26, Kohrt took the words to action when he spoke at the Atlanta Furman Business Breakfast.

Kohrt’s speech centered on the theme of life’s ambiguity, and being willing to take the risks and chances associated with the unpredictable future. With a few examples of his own life’s twists and turns, including the one that led him to White Oaks (the president’s home), he credited the core liberal arts education he received at Furman as the key influence on his life.

Early in his career, Kohrt’s trajectory led to Eastman Kodak in Rochester, N.Y. as a research chemist. “Immediately after Lynne and I arrived, the operation I was supposed to work for shut down,” he said. His new boss gave him six months to discover new ways to make images. “He told me to be curious and talk to some real people.” The scientist who thought his days would be spent in the lab, smelling chemicals and testing theories, was confounded. “I eventually worked to try a new idea and helped to create the world’s first thermal digital print, which now rests in a museum.”

Twenty years later, the Kohrts faced another turning point – a potential move to China.  “In making the decision, we thought about an old Chinese proverb: ‘If we are to go forward together, we must first look back together.’ In other words, we needed to respect the culture we were entering.” In looking back, Kohrt said the liberal arts basis formed at Furman made him feel prepared to approach the adventure in China. “I recognized the way my liberal arts foundation proved its value through the decades thus far and I was sure it would also cross cultures.” And cross cultures it did. Kohrt helped establish a new way of foreign investment with Kodak, and his work was transformative for the industry.

“The liberal arts education is all about outcomes, not processes, and not specific disciplines at the exclusion of others. It helps students become hunters of knowledge through integrated disciplines, hands on research, and the understanding of global relevance. It is more important to be able to think and solve problems above all else,” Kohrt said.

And now Kohrt is putting that education to use in a new way once more – as an interim president who is not a caretaker but an active leader. “As long as I am responsible, we will tackle the tough questions. I hope to set the path for the next leader after me.”