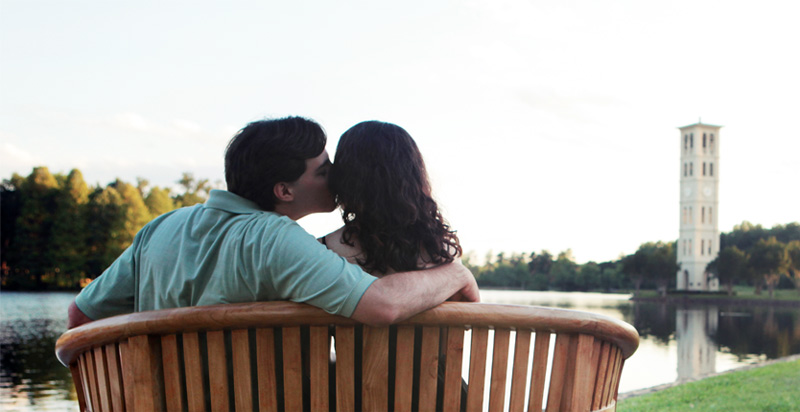 Look to your left. Look to your right. One of you is going to marry someone you meet at Furman.

That’s what former Furman president David Shi told Courtney Tollison’s freshman class at orientation in 1995. How could students determine which classmates would get married? Easy. Just find out who shares their first kiss under the bell tower. At least that’s the urban legend that Shi and many others have spread over the years.

One of Furman’s most iconic structures, the bell tower is situated on a small peninsula stretching into Swan Lake. For more than four decades, it’s been a hot spot for students to hang out and enjoy the outdoors between classes. And naturally, couples have found their way to the bell tower on romantic strolls.

However, at some point in Furman’s history, such strolls took on a new meaning. According to the school’s mythology, if you planted a kiss on your partner at the tower, you were going to marry them. That quickly made the bell tower a place to visit — or possibly avoid.

So when did the bell tower start playing Cupid? Tollison, now an assistant history professor at Furman, remembered Shi’s warning when she was writing “Furman University,” a nonfiction book about the school’s history. But when she researched the bell tower’s matchmaking abilities, she couldn’t find anything that explained the origin of the superstition.

“The legend may have gotten started because Furman has a high rate of alumni who meet here and marry,” Tollison ’99 said. “But I did a pretty thorough survey when I was researching my book, and I never found anything to substantiate it.”

Even so, the bell tower is more than a symbol of Furman for many couples. It’s a symbol of their love and life together. For them, it doesn’t matter where the story came from. It matters that it worked.

It almost didn’t happen for Kelly and Stephanie Summerlin.

Thirteen years ago, the couple was planning to spend a rainy evening at Furman’s Asian garden. But when other students started running around and making a lot of noise, they decided to find a more romantic spot. 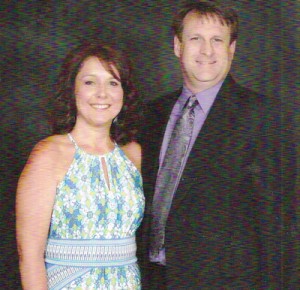 That’s when it happened. The two were walking by the bell tower when Kelly took a chance and kissed Stephanie.

Stephanie had no idea there were more serious implications. She just thought she had shared a romantic moment with her new boyfriend. But Kelly ’93 soon found out he was signing up for a whole lot more.

“Kelly’s roommate knew all about the legend because his parents went to Furman,” Stephanie ’92 said. “After we kissed, he ragged on Kelly saying it was ‘bell tower serious.'”

Despite their marriage, the pair doesn’t necessarily believe in the legend. “We’ve had friends that prove the whole thing wrong,” Stephanie said. But it’s still one of the many Furman stories they like to share with their two daughters.

At a school the size of Furman, you’d expect two communications majors to meet as freshmen. But Chris and Sarah Bainbridge were upperclassmen and strangers when they both enrolled in a theatre class. They got to know each other during class and eventually started out seeing plays together. 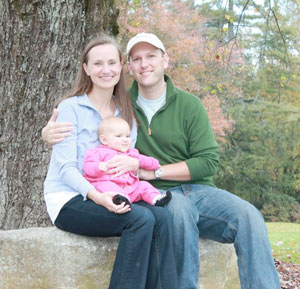 That was Sarah’s idea. “She was a scandalous Furman girl who asked the guy out,” Chris ’02 said.

The pair didn’t have their first kiss at the bell tower. In fact, it didn’t happen there until graduation. Sarah ’02 planned to move back to Nebraska with her parents, and Chris planned on living with some friends in Greenville.

“We didn’t want to break up, but I didn’t want to move, so we were looking at some time apart,” Chris said. “I didn’t know what the future held, but I knew I wanted fate on my side.” His insurance policy? After graduation rehearsal, he grabbed Sarah’s hand, walked with her to the bell tower, and kissed her next to the spiral staircase.

One year later, Chris moved to Nebraska for graduate school and reunited with Sarah. They were married two years later —proving the bell tower’s magic isn’t necessarily limited to a first kiss.

“We consider everything about Furman magical, but I’m especially glad that the magic of the bell tower worked,” Chris said.

Burton and Bryan Jones will tell you the bell tower story is true, even if one of the individuals involved isn’t a Furman student. 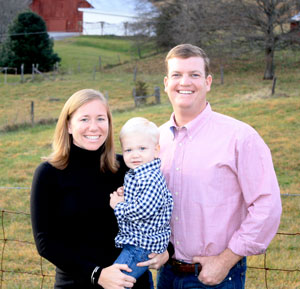 When Burton came to Furman, she was dating Bryan, her high school sweetheart who was still finishing high school in Jacksonville, Fla. When Burton heard about the bell tower story, she made sure to get a kiss with Bryan when he visited for the annual “My Tie” dance.

“Sure, I believed in the legend,” Burton ’04 said. “I was 18, I was homesick for him, and I believed we were going to get married and be together forever.”

Bryan ended up enrolling at Presbyterian College in Clinton, S.C., which is about an hour from Furman. During Burton’s senior year, Bryan took her out to dinner. While they were out, he asked Burton’s roommate to line the walkway at the bell tower with candles.

“We drove by the bell tower on the way home because I was in North Village,” Burton said. “I saw all the candles on the path and he asked me to marry him. Now, we have an 18-month-old son and we’re expecting a daughter in June.”

A rite of passage

There was no doubt in Meredith Hartman’s mind that the bell tower’s magic was real.

There was just one challenge: Getting her boyfriend to actually kiss her at the bell tower.

“There’s a Taylor Swift song that says, ‘Do you remember we were sitting there by the water. You put your arm around me for the first time,'” Meridith ’07 said. “Whenever I heard that song, I would think about a night where we were sitting by the bell tower. I always thought ‘I hope he kisses me here and we get married.'”

It took a while for that to happen. Chris ’07 kissed Meredith for the first time when the two exchanged Christmas presents their freshman year, but that smooch didn’t happen at the bell tower. Meredith, however, was still convinced they needed to fulfill the legend.

So shortly after graduation, when Chris was set to deploy for Iraq, the couple returned to Furman. Meredith was teaching in Raleigh, N.C., and Chris was stationed in Savannah, Ga.

“We met up in Greenville and he took me to the bell tower and kissed me,” Meredith said. “It dawned on me that was the first time we kissed under the bell tower. It was too perfect, and I thought he was definitely going to propose.”

Chris didn’t propose that night. But the bell tower had worked it’s magic. When the couple reunited in Charleston, S.C., Chris popped the question.

“I told him later I was disappointed that he didn’t ask me (when we first kissed at the bell tower), but then I thought it was sweet he thought to go there before he left,” Meredith said. “He said he felt like it was something we had to do as Furman couple before we got married.”