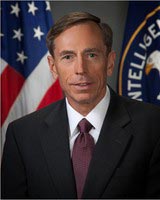 GREENVILLE, S.C.—David Petraeus, Director of the Central Intelligence Agency, will speak at the luncheon for the David Wilkins Awards for Excellence in Legislative and Civic Leadership Tuesday, Jan. 24 at 1:15 p.m. in the Columbia Metropolitan Convention Center.

Petraeus was sworn in as the 20th Director of the CIA on Sept. 6, 2011.  Prior to that, he was a four-star general serving over 37 years in the U.S. Army.  He most recently served as the Commanding General of American and International Forces in Afghanistan, and was Commanding General, Multi-National Force-Iraq in 2007-08, where he oversaw all coalition forces in Iraq.

Tickets are $125 each and can be purchased by calling 864-235-8330 or online at the Riley Institute website.  Table sponsorships are also available.

Smith is the winner of the Wilkins Award for Excellence in Legislative Leadership, which recognizes a state legislator who embodies the highest principles of leadership.

A Democrat representing Richland County District 72, Smith was elected to the South Carolina House of Representatives in 1996, where he has served as Assistant Minority Leader, Chief Minority Whip and House Minority Leader.  He spent a year in Afghanistan serving as an Army National Guard captain, and has received the Combat Infantryman’s Badge, The Bronze Star and The Purple Heart.  He graduated from the University of South Carolina in 1990 and earned his J.D. degree from the University of South Carolina School of Law.

Sellers is the recipient of the David H. Wilkins Excellence in Civic Leadership Award, which honors a community leader whose work has improved the lives of South Carolinians.

Sellers is chair of the board of BlueCross BlueShield of South Carolina, and served as its chief executive officer for 18 years before retiring from that position in 2010.   He serves as a director of Palmetto Conservation Foundation, American Red Cross, and ETV Endowment of South Carolina, as well as chairman of the board of the South Carolina State Chamber of Commerce and Columbia College.  He is a graduate of Vanderbilt University and earned an MBA from Harvard Business School.

The Riley Institute is named for Furman graduate and former South Carolina governor and U.S. Secretary of Education Richard W. Riley. It offers a broad array of programs designed to engage students and citizens across South Carolina in the various arenas of politics, public policy and public leadership.

For more information, contact the Riley Institute at 864-294-3546 or e-mail megan.dodgens@furman.edu.