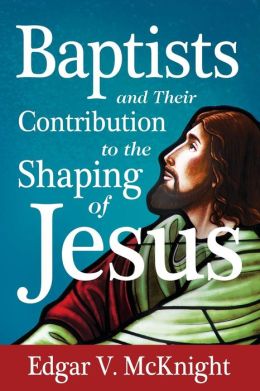 Baptists and Their Contribution to the Shaping of Jesus is published by Nurturing Faith, Inc.

McKnight, author and editor of more than a dozen books in biblical studies, writes that Baptists have contributed in a peculiar way to the understanding of Jesus as the Christ.  Because of the Baptist vision and Baptist answers to persistent questions about the identity of Jesus, Baptists have had their own unique take on the shaping of Jesus.

The book opens with a prologue framing the Baptist vision and a chapter introducing the origins of modern Baptists in England at the beginning of the 17th century.  The historical revolution in Jesus studies and the christological argumentation among Baptists is also given detailed treatment in a discussion of seminal American figures in Baptist scholarship.

A resident of Greenville, McKnight is a prolific writer and editor who taught at Furman for 35 years before retiring in 1998. The Charleston native received degrees in history, New Testament studies, and philosophical theology from the College of Charleston, Southern Baptist Theological Seminary, and Oxford University.

He has authored, co-authored or edited more than a dozen books in the area of biblical interpretation. McKnight’s more recent work includes Reading the Bible Today: A Twenty-first Century Appreciation of Scripture; Jesus Christ Today: The Historical Shaping of Jesus for the Twenty-First Century; and a commentary on the letter to the Hebrews.

McKnight recently completed an essay on “Form Criticism and the Interpretation of the New Testament” for a Festschrift honoring the dean of Yale Divinity School. He is also completing plans for revising his book What is Form Criticism? (1969), which had its 14th printing in 2000 and was translated into Korean and Japanese in 1981 and 1982, respectively.

More information about Baptists and Their Contribution to the Shaping of Jesus may be found here. The book is available at Barnes & Noble Bookstore at Furman. It is also available for Kindle, Nook or iPad, or in print from Nurturing Faith.