Anderson takes his shot with Saints 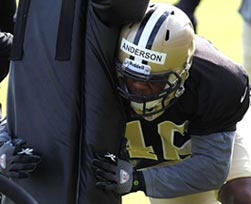 Kadarron Anderson, an All-America linebacker at Furman who graduated in 2012, agreed to terms with the New Orleans Saints shortly after the 2012 NFL Draft. Despite going undrafted, Anderson was determined to pursue his dream of making an NFL roster. Not hearing his name called was just a minor set-back considering the path he has taken to reach his dream. The Saints featured Anderson’s story on its website.