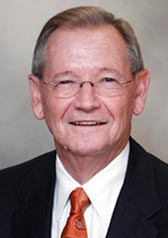 GREENVILLE, S.C.—The Milliken Foundation has made a $1 million contribution to Furman University in honor of Furman trustee Daniel S. Sanders, who recently retired from the Milliken & Company Board of Directors.

The gift will go to support Furman’s Charles H. Townes Center for Science.  The building’s library will be named for the Sanders family.

According to the Milliken Foundation, the contribution to Furman was made in honor and recognition of Sanders for his eight years of service on the Milliken & Company board, including stints as lead director and non-executive chairman.

Counting the Milliken gift, Furman has received $9 million in grants and private donations during the past two months.  The Because Furman Matters fundraising campaign, which seeks to raise $400 million by the end of 2013, currently stands at $342 million.

In addition to serving on the Furman Board of Trustees, Sanders co-chaired the university’s Parents Council and has served on both the Advisory Council and executive committee of the Richard Furman Society.  His wife, Emilyn, is also a trustee emeritus at Furman, and their sons, John and Dan, and Dan’s wife, Suzanne, are Furman graduates.

Milliken, which is headquartered in Spartanburg, is an innovation company that has been exploring, discovering and creating ways to enhance people’s lives since 1865.  The company has developed one of the larger collections of United States patents held by a private U.S. company, and it offers expertise across a breadth of disciplines, including specialty chemical, floor covering, and performance materials.  Milliken has been named a “World’s Most Ethical Company” for five consecutive years.

For more information, contact Furman’s News and Media Relations office at 864-294-3107 or visit the Because Furman Matters website.