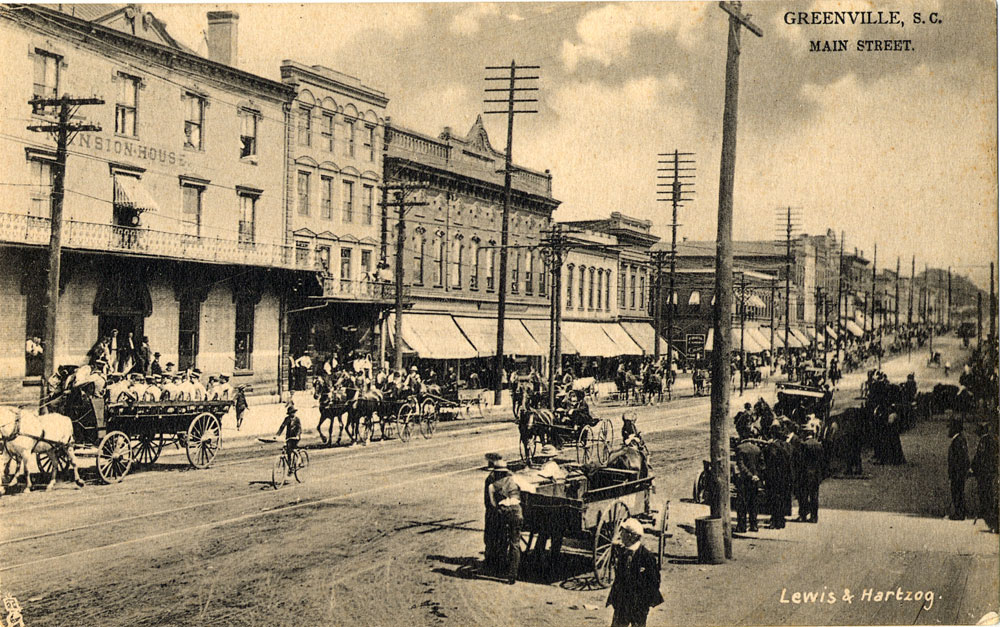 Former Furman First Lady Bea Plyler once walked where Plato, Socrates and Pericles also walked, but her thoughts were of her home and her family.

“I am now sitting in the highest part of the Acropolis near the huge pillars of the Parthenon and I’m wishing you were here to enjoy this magnificence with me…” she wrote in a postcard to her son, John Jr., from Athens in 1953.

The current Furman Special Collections exhibition in the James B. Duke Library, “Wish You Were Here,” captures the nostalgia of both travel and of days gone by. It features vintage postcards of Furman University, Greenville Woman’s College and other tourist destinations.

It offers a snapshot into South Carolina history, showing the importance of textile mills to Greenville’s economy and displaying romanticized scenes of cotton harvesting in the South.

The exhibit also touches on the history of Greenville, showcasing prominent hotels, churches and other area landmarks. A highlight is the ever-changing scene of Greenville’s Main Street, starting with a 1908 postcard showing the downtown hustle-bustle of horse-drawn wagons and carriages.

While postcards began as a way for people to exchange short messages, over time they became an essential part of vacationing, said special collections and archives assistant Julia Cowart, describing postcards as a precursor to social media.

The United States Postal Service began issuing pre-stamped 1-cent postal cards in 1873, and was the only establishment allowed to print postcards until Congress passed the Private Mailing Card Act in 1898, which allowed private publishers and printers to produce postcards.

The oldest card Furman now has is from 1875, according to Cowart, and is part of a donation made last month of more than 1,200 postcards, photographs, books and memorabilia from local historian and author Richard D. Sawyer. Sawyer’s grandfather was a Furman staff member for 35 years, from 1923 to 1958.

“The collection provides a glimpse into Greenville’s history,” said Sawyer, who began traveling across the South 40 years ago in search of rare and memorable postcards. “I want people to enjoy them as much as I have.”