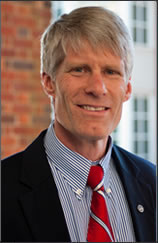 Furman political science professor Brent Nelsen was quoted in a Politico article about the chances that Rep. Tim Scott would be chosen to replace Jim DeMint, the South Carolina Senator who resigned to take a job running The Heritage Foundation.  If so, Scott, a conservative black Republican, would be the first African-American senator from the South since Reconstruction.