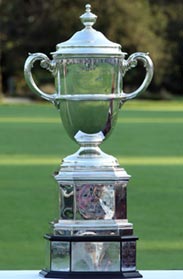 Former Furman golfer Todd White has been named to the 2013 U.S. Walker Cup team that will play Great Britain and Ireland Sept. 7-8 at National Golf Links in Southampton, N.Y.

The 45-year-old White, who resides in Hilton Head, S.C., is one of 10 amateur golfers selected to represent the United States in the prestigious competition. He played golf at Furman from 1987-90, where he was a four-time All-Southern Conference selection and won four tournaments. The 1990 graduate was inducted into Furman’s Athletic Hall of Fame in 2003.