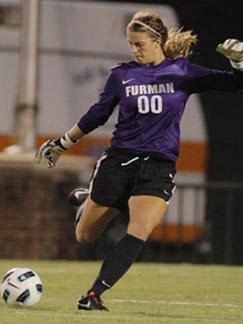 Goalkeeper Rose Hull was named to the preseason All SoCon team.

The Furman women’s soccer team has been selected as the preseason favorite in the Southern Conference in voting by the league’s 11 head coaches. Sophomore Stephanie DeVita, the 2012 SoCon Player and Freshman of the Year, highlights a group of five Paladins who were named to the 11-member preseason All-SoCon team. Furman returns 10 starters from a 2012 squad that posted a 16-3-3 overall record and 7-2-2 SoCon mark.