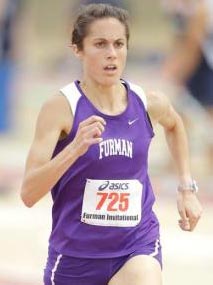 Heating up the track during the cold indoor season, Furman senior Erin Barker started off the year by running a 4:57.62-minute mile. Not only did she break Furman’s school record for the women’s mile by one second, but she also put the Barker name back on the board for the fastest mile time at Furman.

“I felt very much in control, really relaxed, and like I had some left at the end,” Barker said when asked about how she felt during the 1609-meter race.

Phil Barker, Erin’s father, cheered his daughter on to the record Jan. 14 at the stuffy UNC Chapel Hill indoor track. Over the years he has watched Erin compete many times, but he is sure to have felt more than just a pang of pride witnessing his own flesh and blood beat the same school record that he himself broke for Furman’s men in 1978.

Phil set the Furman men’s record for the mile, posting a time of four minutes and five seconds. It took 30 years for his time to be beaten, but now the Barker name is back on the board as the fastest in Furman history.

Erin says she and her dad both love to race the mile because “it’s quick, and it’s not long enough to think very much.”

Then again, competing for Furman has long been a no-brainer for the entire Barker family. Erin’s mother played tennis for the university, while her older sister, Lindsey, contributed four years to Furman’s running program herself.

The record, though, was not set thanks to competitive genes alone; Erin claims that “high volume runs and longer workouts at our mile pace” are the secret to her success. “We came back from Christmas and jumped into these quick, quick workouts rights away.”

As the Southern Conference indoor track season moves toward the final race, Erin has her sights set on another first-place win. Regardless of the outcome, you can be sure that her number-one fan, her father,  will be at the track cheering her on.