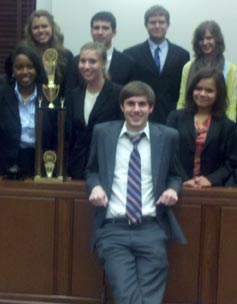 The tournament, hosted by Eastern Kentucky University, featured 26 programs from around the Ohio Valley and the South, including former national champions Miami of Ohio, Rhodes and Bellarmine.

This year’s Sanders championship represents the third time in the tournament’s 11-year history that Furman has been crowned the champion.

The winning team was led by Alyssa Richardson ’12 of Columbia, who won an outstanding attorney award both as a defense and a prosecution attorney.

The next stop for Furman’s mock trial teams is the Red Carpet Classic hosted by UCLA, the reigning national champions, Nov. 4-6.