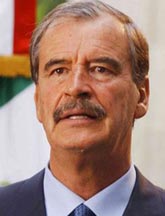 GREENVILLE, S.C.—Former Mexico President Vicente Fox will talk about “Bringing Peace to Mexico” when he speaks on the Furman University campus Wednesday, April 18 at 7 p.m. in McAlister Auditorium.

His talk, which is free and open to the public, is sponsored by the university’s Hispanic Organization of Learning and Awareness, College Democrats, College Republicans, The Cicero Society, FUSAB, SGA, Department of Political Science, and the Riley Institute at Furman.

Fox served as President of Mexico from 2000 to 2006 and currently serves as co-president of the Centrist Democrat International, an international organization of Christian democratic political parties.

He was elected Mexico’s President in the 2000 election, a historically significant election that made him the first president elected from an opposition party since 1910 and the first one in 71 years to defeat the then-dominant Institutional Revolutionary Party (PRI).

After serving as president of Mexico for six years, Fox returned to his home state of Guanajuato, where he resides with his wife and family. Since leaving the presidency, he has been involved in public speaking and the construction of the Vicente Fox Center of Studies, Library and Museum.