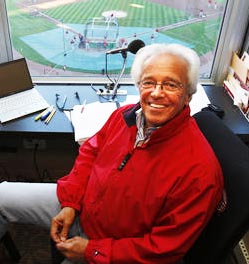 Marty Brennaman has been the voice of the Cincinnati Reds for 39 years.

GREENVILLE, S.C.—Marty Brennaman, the Hall of Fame broadcaster who has spent 39 years as the “Voice of the Cincinnati Reds,” will speak at the annual fundraiser for the Furman University baseball team on Wednesday, Feb. 8 at the TD Convention Center.

Brennaman will be joined by peak performance coach Brian Cain at the dinner, which begins at 7 p.m., and will be preceded by a private reception at 5:30 p.m.

Tickets can be reserved by calling the Furman Baseball office at (864) 294-2146. All proceeds benefit the Furman baseball team.

Brennaman received the Ford C. Frick Award in 2000 from the National Baseball Hall of Fame in Cooperstown, N.Y.  Brennaman, Red Barber and Russ Hodges are the only Reds announcers ever to receive the Hall of Fame’s prestigious broadcasting award.

The 2012 season will be Brennaman’s 48th as a broadcaster and his 39th in Cincinnati. He joined the Reds radio team in 1974 and for 31 seasons (1974-2004) shared the radio booth with Reds Hall of Fame pitcher Joe Nuxhall. Brennaman has been named Ohio Sportscaster of the Year 16 times, most recently in 2009.

Cain is a peak performance coach and sport psychology consultant who has worked with and mentored some of the best athletic programs at the college and high school level as well as world champion coaches and athletes. Cain is known for helping his clients unlock their potential to gain a competitive advantage over opponents.

For more information about the dinner, contact the Furman Baseball office at (864) 294-2146 or ron.smith@furman.edu.