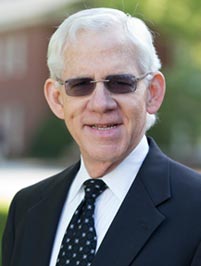 GREENVILLE, S.C.—Furman University professor John Shelley, who retired this summer after teaching religion at the university for 33 years, will serve as speaker when Furman holds its summer commencement exercises Saturday, Aug. 10 at 8 p.m. in McAlister Auditorium.

The university will award approximately 70 undergraduate and graduate degrees during the ceremony. The public is invited to attend.

Shelley, who retired following the 2012-13 academic year, was awarded the Alester G. Furman, Jr., and Janie Earle Furman Award for Meritorious Teaching at the university’s spring commencement.  He is co-founder of the university’s Poverty Studies program, and was the first recipient of the Dorothy and B.H. Peace Professorship in Religion.

A graduate of Clemson University, Shelley earned a Master of Divinity degree from Southern Baptist Theological Seminary and received his doctorate from Vanderbilt University. He has also served on the editorial board of the Journal of Christian Ethics, and has written numerous reviews of works in the field.