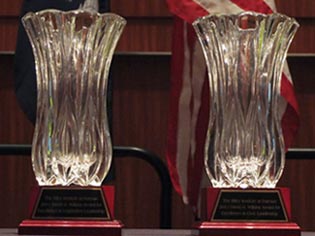 The Wilkins awards are given out annually in recognition of outstanding legislative and civic leadership in South Carolina.

The Riley Institute at Furman University has announced that South Carolina Sen. Paul Campbell (R-Berkeley-District 44) and the late Steve Morrison of Columbia are recipients of the Institute’s annual David Wilkins awards recognizing outstanding legislative and civic leadership in the state.

The awards will be presented in Columbia Tuesday, Jan. 14, 2014 at the Riley Institute’s ninth annual David H. Wilkins awards dinner, which takes place in the Columbia Metropolitan Convention Center.  The evening begins with a reception at 6 p.m., and the dinner and awards presentation will follow at 7:30 p.m.

The speaker for the event will be former South Carolina Governor and U.S. Secretary of Education Richard W. Riley.

Tickets are $125 each and can be purchased by calling 864-235-8330 or visiting the Riley Institute website.  Table sponsorships are also available.

Campbell, a Republican, has served as the state senator for the Berkeley, Charleston and Dorchester County areas since 2008.  He is a member of numerous Senate Committees, including Finance, Agriculture and Natural Resources.  He retired in 2003 as regional president of Alcoa Primary Metals, and currently serves as director of airports for the Charleston Aviation Authority.  Campbell has served as chair of the South Carolina Chamber of Commerce, and as president and campaign chair of Trident United Way.  He is a graduate of Clemson University, and holds a M.B.A. degree from Jacksonville State University.

Morrison was a partner with the law firm of Nelson Mullins Riley & Scarborough, where he was a member of the organization’s executive committee.  He was a civic leader in Columbia and was well known throughout South Carolina for his efforts to promote justice and racial equality.  Morrison was the chief litigator who represented the rural school districts in the landmark case, Abbeville vs. the State of South Carolina, also known as the “Corridor of Shame” lawsuit.  He was a graduate of the University of Michigan, and received his J.D. from the University of South Carolina School of Law.

The Riley Institute offers a broad array of programs designed to engage students and citizens across South Carolina in the various arenas of politics, public policy and public leadership.

For more information, contact the Riley Institute at 864-294-3546 or e-mail judith.mckenney@furman.edu.