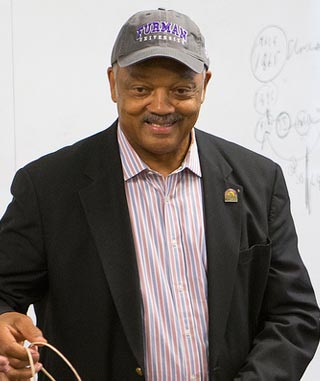 At age 13, long before he became one of America’s foremost leaders for civil rights alongside Martin Luther King, Jr., Greenville native Jesse Jackson dreamed of attending Furman University, earning a degree, and perhaps eventually teaching at the school.

That wasn’t possible, however, since Furman didn’t integrate its student population until 1965, a year after the passage of the Civil Rights Act.

Now, more than 50 years after participating in the 1963 Freedom March on Washington by 200,000 blacks and whites to support equal human civil rights in America, Jackson recently appeared at Furman to speak before two separate gatherings.

Throughout both talks, Jackson urged the attending students to remember the past, and to keep going forward and “building bridges” for more positive social change—beginning within themselves as individuals.

“Looking in the rearview mirror has its place, but we can’t linger there,” he said on Oct. 30 to a crowd of about 800 in Furman’s McAlister Auditorium. “Our place is in looking at the joy in the windshield.”

Attending Furman students Simone Holloway and Laura Bardin, who are not the same color or race, said it was people like Jackson and King that had made it possible for them to be close friends in 2013 without the fear of stigmas.

“I think part of the past that Rev. Jackson spoke about is being played out now,” said Bardin, a second-year major in Spanish and Poverty Studies.

Holloway, a senior political science major, added, “If we just talk about change but don’t initiate it, we’re just fooling ourselves.”

That is one reason why Furman history professor Dr. Diane Vecchio brought Jackson in to speak.

His appearance was part of The Year of Altruism, a 2013 year-long celebration supported by more than 80 Upstate organizations to include Americans who have figured prominently in initiating civil rights changes.

“We try to teach our students the relevance of history,” Dr. Vecchio said. “And for me, Rev. Jackson…makes the Civil Rights movement come alive for them.”

Especially considering that Jackson’s initial desire to be a Paladin would always be connected to the birth of the civil rights movement.

“It was 1954—and we all had (Paladin basketball legend) Frank Selvy on the brain,” he said. “And Furman University was the university of my dreams. But I could not apply at the time.”

And Furman wasn’t the first big prize unjustly denied him, he said.

When Jackson was asked by one of Vecchio’s students in a private lecture on Oct. 31 what made him first want to pursue the cause of Civil Rights so strongly, he told them a story of his first day of school in the 1940s.

“From my front porch, we could see the schoolhouse on Cleveland Street up the hill—a nice red, brick schoolhouse with merry-go-rounds and swings and rows of tulips,” he said.

There was another school further away on Sullivan Street, he added, whose yard didn’t have any grass or swings or tulips or merry-go-rounds.

“So in my own mind, going to school the next year meant going to the one that was closest (to my home) and most attractive.”

But when that day came, his excitement vanished when his mom, who walked him to school that first day, suddenly gave a jerk on his hand.

“My mother turned my foot this way (away from the nice school),” said Jackson, soon realizing that they were headed for Sullivan Street. “And something hit me, or something hurt me, by that (early memory of segregation).”

Furman couldn’t admit him 50 years ago.

But at the end of his talk in Vecchio’s class, when she and her 20 students presented him with applause and a Paladin ballcap, a smiling Jackson couldn’t help but say, “Finally.”