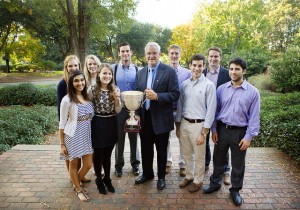 In the tournament that UGA Mock Trial described as “the most competitive field yet,” Furman’s 10-member team did not drop a single ballot. Furman mockers out-performed 25 teams including those from Harvard, Rhodes College, Vanderbilt and UCLA, among others.

The winning Furman team members are:

At GAMTI, Furman tied for first place with the University of Virginia A and B teams and Rhodes College. This result marks Furman’s first team award at GAMTI since 2009. The 18-team field at GAMTI included Harvard, Yale, Rhodes College, UCLA, UC-Berkeley, Northwestern University, and Duke among other top-tier universities.

For more information, contact the Furman University News and Information Office at 864-294-3107.