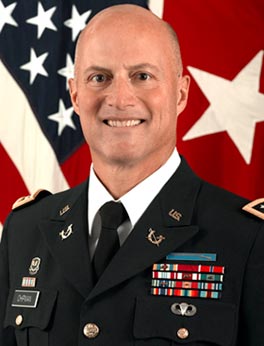 His lecture, “Combat Boots and Benefits: Equality in an Era of Change,” is sponsored by the Riley Institute at Furman.  It is free and open to the public.

Chipman’s talk will focus on how the military is on the front lines of social change as it begins to allow women in combat, provide equal benefits for gay Americans, allow religious exceptions to grooming, and seeks an environment free from sexual harassment.

Chipman is the senior uniformed attorney in the Army.  He assumed his current duties as Judge Advocate General on Oct. 1, 2009.

Chipman is a 1980 graduate of West Point, and earned a Juris Doctor degree from Stanford Law School. He also holds a Master of Laws in Military Law degree from The Judge Advocate General’s School and a Master of Strategic Studies degree from the U.S. Army War College, Carlisle Barracks.

Chipman has served as a judge advocate in a variety of operational and staff assignments.  In 2001 and 2002, he deployed as the legal advisor to a Joint Special Operations Task Force for Operation ENDURING FREEDOM in Afghanistan. As a general officer, he commanded The Judge Advocate General’s Legal Center and School in Charlottesville, Va.

For more information about the lecture, please call the Riley Institute at 864-294-3546 or jill.fuson@furman.edu.