Singers alumni to perform in concert 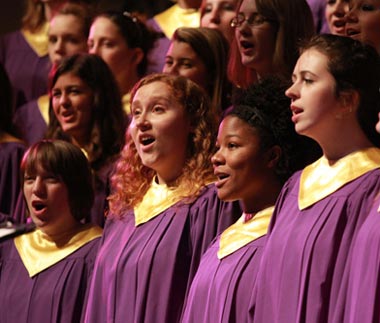 The Singers will return to campus Aug. 2-4 for their annual reunion.

In addition to music by Haydn, Brahms and Schubert, the program will include Paul T. Langston’s “God of Grace and God of Glory,” Dan Forrest’s “St. Patrick’s Hymn” and David Schwoebel’s “God Be in My Head.” The concert will also feature the traditional “Battle Hymn of the Republic.”

The public is invited to attend.

Founded in 1946 by DuPre Rhame, the Furman Singers are recognized as one of America’s premier collegiate choirs.  The group has performed at national and regional conventions of the American Choral Directors Association as well as inaugurations of South Carolina governors.  The Singers have made regular tours of the Southeast, Europe and the former Soviet Union.  The group has also performed national concerts with the Boston Pops.

For more information on the reunion and concert at First Baptist Church, contact the Furman Music Department at (864) 294-2086.