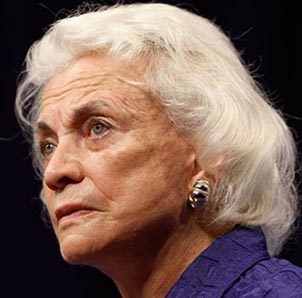 CHARLESTON, S.C.—Former Supreme Court Justice Sandra Day O’Connor will be the keynote speaker for the 2013 Law & Society Symposium to be held in Charleston Monday, April 15.

The program, which will focus on the separation between church and state, will take place at the Charleston Music Hall.  It is co-sponsored by the Charleston Law Review and the Riley Institute at Furman University.

O’Connor became the first woman to serve as an Associate Justice on the United States Supreme Court in 1981.  She served for 24 years before retiring from the court on Jan. 31, 2006.  In 2009, she received the Presidential Medal of Freedom from President Obama.

“The Charleston School of Law is tremendously honored to have Justice Sandra Day O’Connor lead our fifth annual Law and Society Symposium,” said Dean Andy Abrams.  “In addition to being a true pioneer in the legal profession, Justice O’Connor is also one of the leading jurists of this or any era.  Her career mirrors the mission of our law school—using the law to make a positive impact on the lives of individuals and communities.”

“Justice O’Connor is a great American public servant, and to so many in our country, an extraordinary hero,” said Rod Smolla, a symposium panelist and president of Furman University. “During her years of service on the Court, she was instrumental in shaping the core fabric of American law. She always conducted herself with dignity and civility as she was involved in the most important issues of our times.”

The day-long symposium will focus on a constitutional test proposed by O’Connor in a 1984 ruling in Lynch v. Donnelly.  In that case, she proposed that a government action can violate the First Amendment’s separation of church and state if a reasonable observer perceives the action endorses or disapproves of religion.

“Justice Sandra Day O’Connor proposed the endorsement test in 1984 to determine whether government action, such as school prayer, violates the Establishment Clause of the First Amendment,” said Professor of Law Sheila B. Scheuerman, who is coordinating the symposium.

“This year’s symposium brings together leading scholars and practitioners to discuss the current state of the endorsement test as well as its future.

“The students are very excited and welcome this one-of-a-kind opportunity to hear the first woman appointed to the United States Supreme Court discuss this fascinating area of law.”

The symposium, “In Search of a ‘Grand Unified Theory’: Thirty Years with the Endorsement Test,” offers four panel discussions on the test offered by O’Connor.  The retired justice is scheduled to offer keynote remarks at 3:30 p.m.  Top speakers and panelists from around the country will participate in the symposium, including Smolla, U.S. District Judge Richard M. Gergel and U.S. District Judge P. Michael Duffy, both of the District of South Carolina.

The symposium, which will be at the Charleston Music Hall, qualifies for 7.0 Continuing Legal Education credits in South Carolina. The event is open to the public. Tuition for the symposium is $125 with CLE credit, but discounted to $100 before March 15.  General admission without CLE credit is $25.