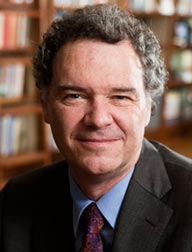 GREENVILLE, S.C.—Edward Ayers, noted historian and president of the University of Richmond, will speak on “Visualizing Emancipation” Tuesday, Jan. 22 at 7 p.m. in the Younts Conference Center at Furman University.

Ayers’ lecture, which is free and open to the public, is the final event in a series commemorating the 150th anniversary of the Emancipation Proclamation.

He is also the author of In the Presence of Mine Enemies: Civil War in the Heart of America, 1859-1863, which earned Ayers the 2004 Albert J. Beveridge Award from the American Historical Association and the 2004 Bancroft Prize for Distinguished Book in American History from Columbia University.  He was named president of the University of Richmond in 2007

“Freedom Stories: A 150th Anniversary Series” began in the fall of 2012 and included lectures, workshops and community history projects to commemorate the 150th anniversary of the Emancipation Proclamation. The series is sponsored by Furman and the Upcountry History Museum.

The Upcountry History Museum, which sits on Heritage Green and promotes the history of the Upcountry’s 15 counties, opened to the public in 2007.  Its mission is to present and preserve the history of Upcountry South Carolina through education, research and service.

For more information, contact the News and Media Relations office at 864-294-3107 or Lloyd Benson at lloyd.benson@furman.edu.