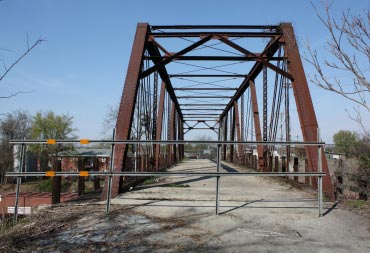 Sociology professor Ken Kolb first became intrigued by the dilapidated structure during his morning commute, biking to work at Furman via the Swamp Rabbit Trail.

Since then, his interest in Greenville’s Hampton Avenue bridge has developed into a May Experience course and a focus of conversation with neighbors as he and a group of Furman students have gone door-to-door in the Southernside community this month.

The aging bridge, guarded from car traffic by concrete barriers and overtaken with weeds and kudzu, isn’t much to look at. Many people traveling down Pete Hollis Boulevard aren’t aware the bridge exists. However, Kolb’s class, “Public Sociology,” is interested in the story the bridge tells.

Still regularly used by pedestrians, the Hampton Avenue bridge has been making headlines in recent months, as a small group of community members discuss the bridge’s future with the Norfolk Southern Railroad and the state Department of Transportation. Among the concerns are the bridge’s deteriorating condition and its economic value to the community. (Click here to learn more.)

Kolb’s class isn’t getting involved in the politics of whose job it is to maintain the bridge. What they are doing is talking to members of the community, assessing their needs and asking them what they want done about the bridge, which is located on the border between the city and the county.

“It’s a good test case for how a social problem can exist so close to us, yet seem invisible,” Kolb says.

Students are currently conducting interviews, collecting surveys, gathering data, and analyzing information that, with the help of a consultant, will be compiled into a 10-minute film to be presented to municipal and county officials as soon as next month. The film will show how the neighborhood has been affected, discuss the recent successful reopening of the nearby Queen Street bridge, and outline specific proposals to improve community members’ quality of life.

“It’s a good example of Furman being involved in Greenville,” Kolb says, adding that the class teaches students about positive social change.

“It’s the most practical class you could have. It’s not very often we get to do things like this,” says Dahl, a sociology major. “It’s important to be part of something that matters.”