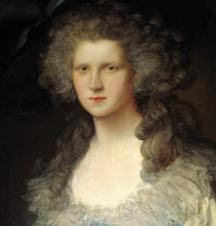 GREENVILLE, S.C.—A portrait of a lavishly-dressed Englishwoman hangs above the fireplace in the formal living room at White Oaks, the home of Furman University’s president. Since she was brought home to the mansion in the 1970s, the creator of the masterpiece was always thought to be renowned English portrait and landscape artist Thomas Gainsborough.

Two years ago, questions were raised about the real painter of the portrait. Was it painted by Gainsborough himself, whose most famous works include “The Blue Boy,” or by his lesser-known nephew, Gainsborough Dupont? By next week, the mystery should be put to rest.

Furman’s Decorative and Fine Arts Committee is bringing to campus Hugh Belsey, the foremost authority on Thomas Gainsborough and former curator of the Gainsborough House museum in Sudbury, England, to examine the work of art, titled “Portrait of Lady Impey.” He will share his findings during a public lecture Tuesday, March 13 at 7 p.m. in Patrick Lecture Hall of the Townes Science Center.

The 1786 portrait of Lady Mary Impey, wife of an imperial judge of India, was purchased in 1975 by Greenville resident Homozel Mickel Daniel from a New York City auction house. It was part of the White Oaks Collection, which was bequeathed to Furman by Mrs. Daniel in 1992. At the time, Sotheby’s could not determine whether the true artist was Gainsborough or his nephew, who worked with his uncle as an apprentice and studio assistant.

Two years ago, a descendant of the Impey family in England contacted Furman to inquire about the painting. Since then, Hamlett has been researching the painting’s provenance. The painting seems to have remained in the family until 1904 and changed hands several times thereafter.

While the painting’s size, style and known origins suggest it is a Thomas Gainsborough painting, Hamlett hopes Belsey’s visit will confirm the theory.

As part of his upcoming lecture, Belsey will also discuss the significance of Thomas Gainsborough’s work, especially those pieces done later in his life. Gainsborough, well-known for paintings including “The Blue Boy” and “Mr. and Mrs. Andrews,” is considered to be one of the masters of 18th century landscape painting and portraiture.

For more information, contact Decorative and Fine Arts at (864) 294-2392 or elizabeth.hamlett@furman.edu.