Furman’s link to the Boston Pops 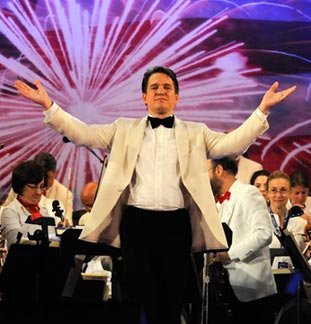 As a Furman University piano student 32 years ago, did Keith Lockhart have a feeling he would one day be an internationally renowned orchestral conductor? Not at all. He planned to be a lawyer. But Lockhart returns to Greenville this week as the conductor of the legendary Boston Pops, where he will lead the group in a Peace Center concert that will include the Furman Symphony Orchestra.

“I originally thought I’d get a music degree and then go to law school,” Lockhart said in an interview with The Greenville News. “That went by the wayside because I dug down deep, understood myself better and realized I had a chance to conduct for a living. It’s fun to come back, especially to talk to students who may be asking the same questions I did.”

Lockhart is not only including the Furman Symphony in the concert but will bring 10 principal musicians with the Boston Pops to Furman to offer musical coaching and advice. The unique collaboration has everything to do with Lockhart’s continued close connection with Furman, from which he earned bachelor’s degrees in piano performance and German.