OCTOBER 23, 2012
by Vince Moore, Director of News and Media Relations 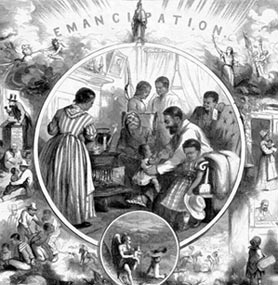 The “Freedom Stories” series continues Oct. 28 with a panel discussion.

GREENVILLE, S.C.—A roundtable discussion about “Slavery, Abolition and the Transition to Freedom” will take place Sunday, Oct. 28 at the Upcountry History Museum/Furman University as part of series commemorating the 150th anniversary of the Emancipation Proclamation.

The discussion will take place from 2-6 p.m. in the Lecture Hall of the Upcountry History Museum.  It is free and open to the public.

“Freedom Stories: A 150th Anniversary Series” features a variety of lectures, workshops and community history projects that will occur throughout the school year.  It is sponsored by Furman and the Upcountry History Museum.

The program will also feature a collection of local freedom stories that detail family accounts of the transition from slavery to freedom.

The preliminary Emancipation Proclamation, which ordered the emancipation of all slaves in the Confederate states, was made in September 1862 with the final document issued by President Abraham Lincoln in January 1863.

Here is the remaining schedule for the “Freedom Stories” series.

Sunday, November 18—A mini-conference, “Meanings, Complexities and Legacies of Freedom,” will take place from 2-6 p.m. at the Upcountry History Museum. Professor Bernard Powers will chair a roundtable discussion with professors Michael West of the College of the Holy Cross, Leslie Schwalm of the University of Iowa, and Michael Fitzgerald of St. Olaf College. A collection of student projects from Furman and other local schools will also be featured.

Tuesday, January 22, 2013—Edward Ayers, president of the University of Richmond, will deliver the series capstone lecture, “Visualizing Emancipation,” at 7 p.m. in the Younts Conference Center at Furman.  One of the nation’s leading scholars on the history of the American South, Ayers is the author of The Promise of the New South: Life After Reconstruction, which was a finalist for both the National Book Award and the Pulitzer Prize, and was named the best book on the history of the American South.

The Upcountry History Museum/Furman University is located at 540 Buncombe Street on Heritage Green in downtown Greenville.

All events are free and open to the public. For more information, visit the “Freedom Stories” website, or contact the News and Media Relations office at 864-294-3107 or Lloyd Benson at lloyd.benson@furman.edu.