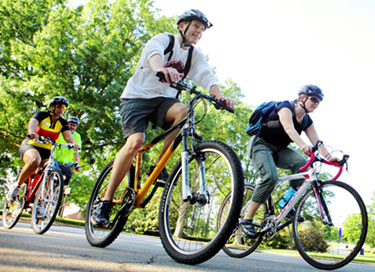 Almost 80 percent of Americans drive alone to work. Another 10 percent carpool, five percent use public transportation, and three percent walk to work. These figures from a 2009 U.S. Census Bureau report also say that a paltry 1.8 percent “use other means,” like cycling, to reach their places of work.

In a move to boost the number of bike commuters on campus, Furman sociology professor Ken Kolb masterminded the “April Commuter Challenge.” By ratcheting up the numbers of bike commuters, he aims to accomplish a couple of things: (1) help folks connect the dots between active lifestyles and healthcare costs, and (2) create a more friendly carbon footprint.

Sixteen Furman faculty and staff members saddled up and made a commitment to bike to work a least once per week during the month of April. Collectively, the participants logged close to 1,200 miles, averaged nine round trips per person, and saved a total of 50 gallons of gas.  A 50-gallon gas savings is significant, but what’s even more remarkable is that savings equates to blocking more than 1,000 pounds of ozone-depleting CO2 from entering the atmosphere. 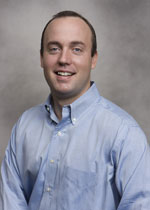 The response to the challenge was so encouraging Kolb set out to build on the idea with a summer-long program called – you guessed it – the “Summer Commuter Challenge.” Kolb hopes to get a boost from initiatives of the League of American Bicyclists (LAB) which has dubbed May National Bike Month. LAB sponsors a bike-to-work week which is capped off by a national bike-to-work day.

Kolb says the reasons folks sign up for the challenge are multi-faceted. He says most are already inclined to bike to work—they have the equipment and desire to do it—but just need a motivational nudge to get going. Besides the joy of getting outdoors instead of riding to work in a cocoon on wheels, Kolb says bike commuters want to achieve a healthier, more active lifestyle while being kind to the environment.

So far, Kolb has seen a respectable number of recruits for the summer program, most of them repeat bikers from the original challenge.  Anyone interested in participating in the program should contact Kolb at ken.kolb@furman.edu or 864-294-2359.