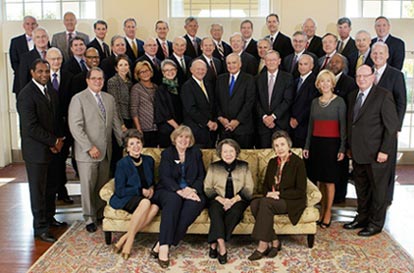 The Furman trustees were on campus Saturday for their spring meeting.

GREENVILLE, S.C.—During its spring meeting Saturday, the Furman University Board of Trustees approved promotions and/or tenure for 14 faculty members and recognized the contributions of three board members whose terms will expire this summer.

Those promoted to the rank of full Professor were Lourdes Manyé (Modern Languages and Literatures) and Jeffrey Yankow (Economics).

Caroline Mills was promoted to the rank of Associate Librarian.

The board recognized three trustees whose terms will expire June 30.  Those leaving the board are Sean Hartness, Rick Timmons and Baxter Wynn, all of Greenville.

In other action, the trustees approved a resolution to begin phase II of the Trone Student Center renovation.  Phase I of the project was completed in the winter, while phase II will begin this summer and be completed by the beginning of the fall semester.

The trustees also heard that the $400 million “Because Furman Matters” campaign now stands at $382 million.  The campaign will conclude at the end of December.