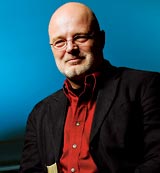 The conference, “Transforming Faith’s Tradition,” is designed for interested laity, church members and ministers who desire to learn about and practice their faith well.

Registration for the event is required with full and partial conference options available. The conference is sponsored by Furman’s Office of the Chaplain and NEXUS Center.

Speakers for the event are Bishop Yvette Flunder and Brian McLaren.

Flunder is founder and senior pastor of City of Refuge United Church of Christ in San Francisco. She served as associate pastor and administrator for Oakland based Love Center Church. She is an ordained minister of the United Church of Christ and a graduate of the ministry studies and master’s programs at the Pacific School of Religion, Berkeley, Calif.

In 2003 she was consecrated Presiding Bishop of The Fellowship, comprised of 110 primarily African American Christian leaders and laity representing 56 churches and faith-based organizations from the United States, Mexico and Africa.  She received her doctorate from San Francisco Theological Seminary.

Brian McLaren is an author, speaker, activist and public theologian. A former college English teacher and pastor, he is an ecumenical global networker among Christian leaders.

In the 1980s he helped form Cedar Ridge Community Church, a nondenominational church in the Baltimore-Washington region, and then later served as the church’s founding pastor.

McLaren has authored a number of books, among them, A Generous Orthodoxy (Zondervan, 2004) and Adventures in Missing the Point (coauthored with Dr. Anthony Campolo, Zondervan, 2003).

To register online for Engaging Faith, go to http://engagingfaith2012.eventbrite.com/.

For more information about the event, contact Susan Bennett in the Office of the Chaplain at 864-294-2133 or susan.bennett@furman.edu or visit http://www.engagingfaith.org/.