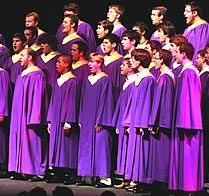 The Furman University Singers, under the direction of Hugh Floyd, have completed their Southeastern concert tour and will perform in concert  Tuesday, March 13 at 8 p.m. in McAlister Auditorium.

The concert is part of the Furman’s Sound Quality series.  Tickets are $15 for adults, $10 for seniors 60+ and Furman employees, and $5 for students/youth.

The group performed in Alabama, Florida and South Carolina during the week of March 4-8.

Founded in 1946, the Furman Singers have maintained a national and international reputation through its annual concert tours and biennial tours of Europe.  The group also toured with the Boston Pops in December 2006 and 2008 as part of the Holiday Pops tour.