OCTOBER 5, 2012
by Vince Moore, Director of News and Media Relations

The Furman University Physics Robotics Team finished in second place in the 2012 Atmel Robotics Contest at the World Maker Faire in the New York Hall of Science in New York City the weekend of Sept. 28-30. 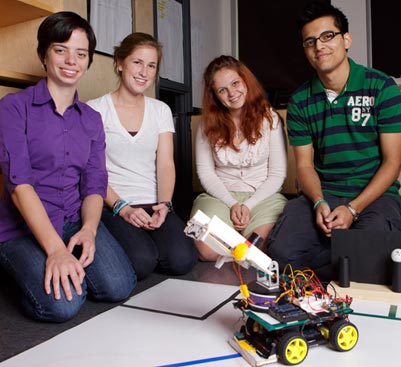 “Aldo” is surrounded by his creators (from left to right) Kristina Pardo, Andrea Fant, Evdokiya Kostadinova and Haris Kahn.

The project, part of the Furman Physics STEM Initiative, has been a four-month-long activity on the part of the students.  It is under the direction of Furman physics professor Dr. John Conrad.

Conrad said the contest participants were asked to design a robot that could perform a series of acts autonomously. Four balls—two ping pong balls and two golf balls—were lined up randomly on an array of pedestals, and the robot was required to determine which was which and deliver the balls to the proper bins for each.

Conrad said it was an impressive feat for the students to program a robot to perform such specific tasks.

“The order of the four balls is random and unknown by the robot,” he said.  “Using optical sensors, the robot had to navigate to the first pedestal position where it stopped, picked up a ball, and determined whether the ball was a ping pong ball or golf ball.  The robot then had to navigate a somewhat tortuous path to deposit the ping pong balls in one receptacle bin and the golf balls in another. The robot had to repeat this procedure until all four balls were retrieved, sorted, transported and delivered.”