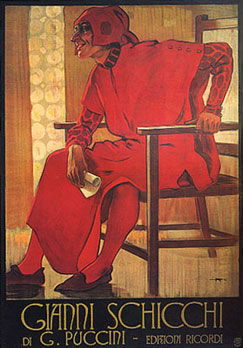 “Gianni Schicchi” is open to the public and is suitable for most family members. Tickets are $12 general admission, $10 for seniors and $5 for students.

Directed by professor of voice and opera studies Bruce Schoonmaker, and conducted by Furman Singers director Hugh Floyd, the story portrays how Gianni Schicchi, self-made lawyer and bon vivant, fools the greedy and avaricious Donati family while pretending to help them rewrite the will of rich relative Buoso. Presented in English, the opera features the talents of Furman students performing beautiful melodies, hilarious comedy, and a touching denouement. Marion Sprott of the Fine Arts Center accompanies the performance on piano.

Lauretta’s famous aria (Italian title, “O mio babbino caro”), anchors the musical creativity of the show. The interaction of family members and the humorous manipulation of them by Gianni Schicchi, create situations in which the family cannot help but aid Schicchi in his quest to enrich his family’s coffers. But a surprisingly sweet plot twist at the end redeems Schicchi in the eyes of the audience.