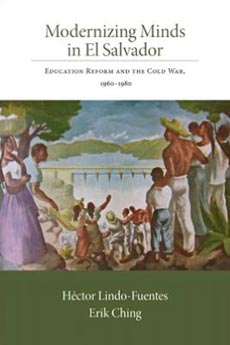 In Modernizing Minds in El Salvador: Education Reform and the Cold War, 1960-1980, the authors examine the processes by which education reform became entwined in debates over theories of modernization and the politics of anticommunism. Further analysis examines how the movement pushed the country into the type of brutal infighting that was taking place throughout the third world as the U.S. and U.S.S.R. struggled to impose their political philosophies on developing countries.

The book is published by University of New Mexico Press and is part of the Diálogos Series of Latin American Studies.

Ching has also co-written Remembering a Massacre in El Salvador: The Insurrection of 1932, Roque Dalton and the Politics of Historical Memory (University of New Mexico Press, 2007), and Reframing Latin America: A Cultural Theory Reading of the Nineteenth and Twentieth Centuries, (University of Texas Press, 2007).

For more information about Modernizing Minds in El Salvador, go to http://www.unmpress.com/, or contact Ching in the Department of History, 864-294-2119, or erik.ching@furman.edu.