September 14, 2012
by Vince Moore, Director of News and Media Relations

GREENVILLE, S.C.—Valerie Horsley, a stem cell researcher at Yale University and a 1998 graduate of Furman, is one of two recipients of the highly competitive 2013 Rosalind Franklin Young Investigator Award. 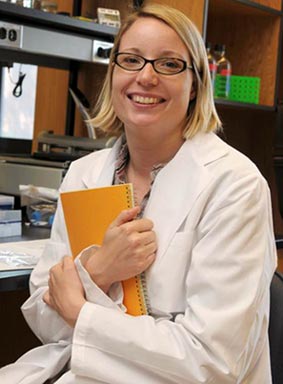 The career development research award, funded by The Gruber Foundation, is presented every three years by the Genetics Society of America and the American Society of Human Genetics to two top women scientists in the field of genetics.

Mary Gehring, a member of the Whitehead Institute and a professor at the Massachusetts Institute of Technology, received the other award. Horsley and Gehring were selected from among early career female applicants from all over the world.

Each of the recipients will receive a $75,000 award administered over three years.

Horsley, who majored in biology at Furman, was recognized for her studies of the epithelial stem cell niche delineated by mouse genetic models. According to the Yale website, Horsley’s lab at the university’s Stem Cell Center uses the mouse as a genetic model system to study how adult stem cells within epithelial tissues help maintain skin, contribute to wound healing, and can be involved in the formation of cancer.

Horsley graduated from Furman with a degree in biology and was a member of Phi Beta Kappa.  She earned her doctoral degree from Emory University, and did her postdoctoral research at Rockefeller University on mechanisms of stem cell lineage commitment and quiescence. She is the Maxine F. Singer Assistant Professor of Molecular, Cellular, and Developmental Biology at Yale.

This is the second major award Horsley has received.  Earlier in the summer, she received a Presidential Early Career Award for Scientists and Engineers, the highest scientific honor bestowed on young scientists by the White House.

Horsley and Gehring will be acknowledged at the 62nd ASHG Annual Meeting in San Francisco on Nov. 9 in conjunction with the Gruber Genetics Prize presentation.

For more information, contact the New and Media Relations office at 864-294-3107 or visit the Gruber Foundation website.