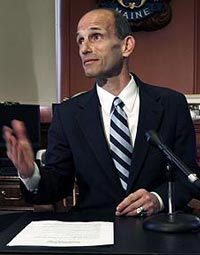 GREENVILLE, S.C.—John Baldacci, former U.S. Congressman and Governor of Maine, will speak about “How and Why Congress is Dysfunctional” Wednesday, Nov. 2 at 7 p.m. in Furman University’s Younts Conference Center.

His talk, which is free and open to the public, is sponsored by the Riley Institute at Furman.

Baldacci was elected to the U.S. House of Representatives from Maine’s Second District in 1994 and served four consecutive, two-year terms.  He then served as Governor of Maine from 2003 until 2011.

Baldacci was first elected to public office in 1978, earning a seat on the Bangor City Council at the age of 23.  He also served 12 years on the Maine State Senate before being elected to the U.S. House.

Baldacci’s talk at Furman will focus on his experiences in politics.  He’ll discuss whether it is more difficult now for policy to be made and politicians to compromise.  The lecture is part of Baldacci’s time at Furman as a Woodrow Wilson Visiting Fellow.