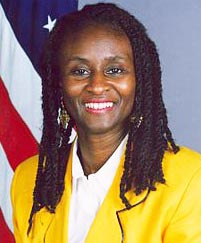 GREENVILLE, S.C.—Robin Sanders, former U.S. Ambassador to Nigeria and the Republic of Congo, will speak on the Furman University campus Tuesday, April 2 at 7 p.m. in Shaw Hall of Younts Conference Center.

Her lecture, “Africa 2013: The Way Ahead,” is sponsored by the Riley Institute at Furman.  It is free and open to the public.

Sanders is on the Furman campus throughout the week as a Woodrow Wilson Visiting Fellow.

Prior to that Sanders was the international affairs advisor and deputy commandant of the Industrial College of the Armed Forces, one of the U.S. military’s premier colleges at the National Defense University in Washington, D.C.  She has served twice as the director for Africa at the National Security Council at the White House.  Her most recent State Department assignment was as international affairs advisor and communication and outreach director to Africare.

Sanders is the owner of FEEEDS, LLC, and board chair of Songhai Integrative Farms Systems, an African organization that focuses on the key global issues of food security, agriculture, sustainable environment, energy, economics, youth education and entrepreneurship. She is the recipient of the Joint Chiefs of Staff Civilian Honor Award, three State Department Superior Honor Awards, and the Presidential Medal of Honor from the President of the Republic of Congo.

A graduate of Hampton University, she received M.A. and M.S. degrees from Ohio University and a Ph.D. from Robert Morris University.

For more information, contact the Riley Institute at 864-294-3546 or jill.fuson@furman.edu.