Update from the editor: Photos from the September 29 race are posted here.

In most academic settings, students study the impact of cancer underneath a microscope or in a textbook. 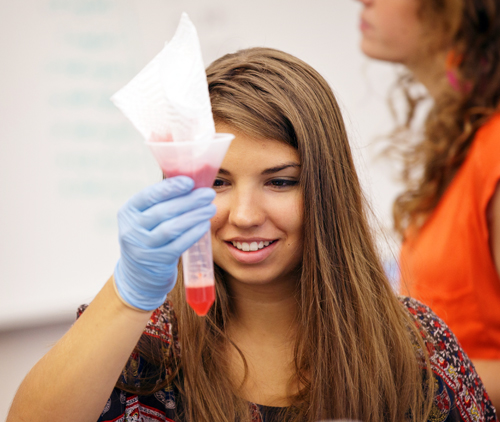 Students enrolled in “Biology, Cancer and Beyond” will participate in charity 5k later this month to raise funds for cancer research and prevention. (Jeremy Fleming)

But Renee Chosed (biology) is taking a different approach this fall in her “Biology, Cancer and Beyond” course.

She has added a human element.

Her students will meet with cancer survivors and the relatives of those who have passed from the disease. Class members, too, will consult those on the front line of fighting cancer: physicians and patients undergoing treatment.

More importantly, they’ll get a chance to join the fight.

The 14 freshmen taking part in the first-year seminar have formed a team to participate in the September 29 Susan G. Komen Race for the Cure event in downtown Greenville. The Komen Foundation has raised more than $1 billion for cancer research since it was formed in 1982.

Since their first day in class, students have been recruiting fellow walkers/runners for the 5k event and encouraging others to make a donation to the Komen race. Most of the money raised at the event will be spent locally on mammogram screenings and cancer education.

Chosed says she participated in a Komen race years ago while conducting research at MD Anderson Cancer Center in Houston and thought that requiring students to take part in the race would “put a human face on this disease.”

“I want them to have a better understanding of what cancer really is, what really causes it, and to be able to better relate to be people with the disease,” she says. “Making science more accessible is a hurdle we have to cross a lot of times.”

Students will also consider the role of faith and religion in helping those who have been diagnosed with cancer and how cancer has been portrayed on film and television.

Of course, no biology course would be complete without some lab work.

Most recently, for example, students completed a DNA isolation in the lab. Later in the semester, they will conduct a test to determine the carcinogen levels of household objects they collect from residence halls and the grocery.

To donate to or participate with the Furman team at the Komen race, please visit the Komen site.