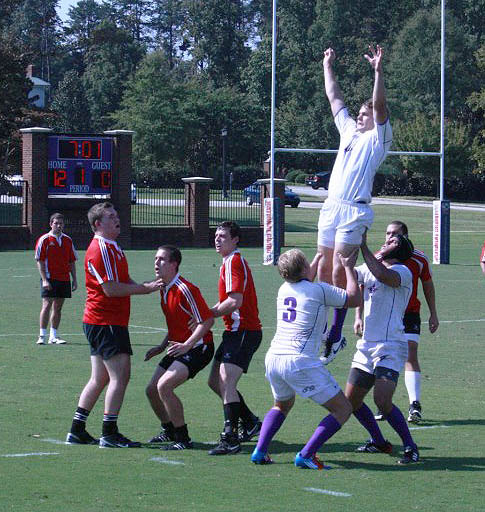 Richard Budd jumps for a lineout.

Furman’s young team continued to improve Saturday as the Paladins posted a 47-5 victory over Davidson.

Played on a sunny clear day at Roberts Field, it took the Paladins 10 -12 minutes to find any rhythm. The Wildcats held the scrum to a draw and matched up well early on in ruck play. The Paladins, uncharacteristically, kept the ball fairly close in the first half and managed a 17-0 lead halftime.

After some adjustment at halftime, the Furman team expanded the game and spread the field.  With the Davidson team under growing pressure the Paladin trys came in bunches.

Throughout the young season the Paladins, composed of 13 freshmen, six sophomores, a junior and a senior, have struggled with field awareness and aggressive at the tacklepoint.

But the team seemed to find its stride and way in the second half.

“We were much more aggressive than I have seen all season,” said Coach Roberts. “We spread the ball a lot today.  In a 60-minute game, I think our wings had about a dozen running touches.”

“Budd ran, straight and played mean,” said Roberts.  “Sammy is a freshman and really had a break-out game. He was all over the place.”Including sevens, the Paladins have posted a 12-4 record this fall.