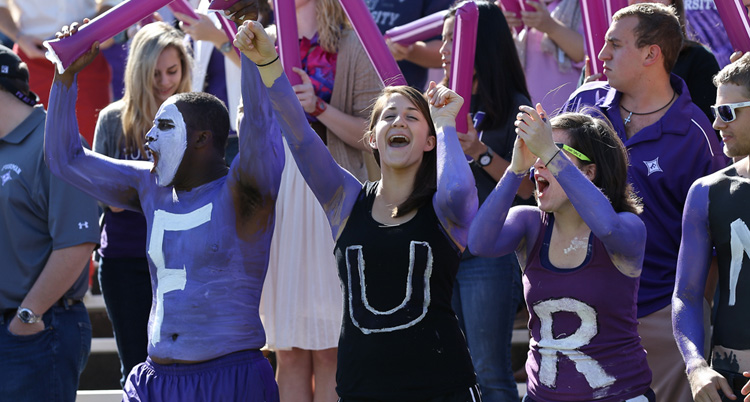 Fifty-five years ago, Pat Morgan was part of the final freshman class at Furman’s downtown campus. Since then, he’s watched the current campus change and grow dramatically over the years. But for him, it’s not the campus that makes Furman home.

“My favorite homecoming tradition is meeting and greeting friends,” Morgan ‘61 said. “Some I haven’t seen in a long time. It’s a family.”

The event reached its climax Friday night when Furman Mall was filled with thousands of alumni, friends and students who descended on campus to view homecoming floats and play carnival games.

“Walking around the mall on Friday night is one of my favorite parts of homecoming,” said Greg Lewis ‘91, an associate professor of biology at Furman. “I like bringing my daughter and her friends out for the rides and having the opportunity to see former students and other alums from my time at Furman.”

The event helps bring the student body closer together, but it also gives student organizations a chance to welcome back alumni and introduce them to new members.

“It gets everyone out,” said Mattson Smith ‘13 (Tega Cay, S.C.). “Friday night we’ll be on the mall until one or two in the morning and we’re planning on having a big dinner with a bunch of fraternity alumni from all different years. It’s one of my favorite nights of the year.”

For classes ending in years two and seven, it was reunion weekend. The groups celebrated with a number of special events, including a reunion dinner in downtown Greenville.

But on Saturday, campus was the place to be–especially for Furman’s newest alums.

“I forgot how beautiful the campus is and how much it feels like home,” said Susannah Morris ‘12.

The fields and parking lots were dotted with purple and white tailgating tents and packed with thousands of alumni. They trickled in and out of the academic buildings to visit former professors before eating a picnic lunch at the Cherrydale Alumni House.

Throughout the day, alums reminisced about their college days, and reconnected with friends. It’s what continues to bring Morgan back to Furman.

“All the friends we had in school, we still have today thanks to the small university atmosphere,” Morgan said. “If I had gone to a big school, I wouldn’t even bother going to homecoming because you’re just a number there.”