Christina Phillips ’13 recently spent her summer operating a zipline across Furman Lake. But this wasn’t your ordinary zipline.

Phillips made 12,000 runs using a special 30-meter-long zipline constructed of garden hose reels and fishing line. Her only passengers were dragonflies, each weighing less than a dollar bill, and traveling along with a single paper clip. 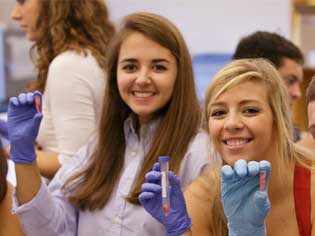 More than 10 species of dragonflies call Furman Lake home, and for several summers, biology professor Wade Worthen’s students have been watching the insects wage battles for the best waterfront properties.

Using the zipline, Phillips and Worthen were able to examine dragonfly behavior, especially how the species compete for territories yet coexist.

From the tiniest molecules to entire ecosystems, students are finding exciting topics to study in the wide range of undergraduate research and internship opportunities offered by Furman’s Biology Department.

Whether it’s research in an indoor laboratory or fieldwork in an outdoor classroom, undergraduate biology research at Furman pairs faculty and students together as collaborative partners. Faculty members serve as mentors for research experiences, involving students in their research and helping them to initiate their own projects.

Biology majors at Furman are required to participate in a research project or an internship before graduation. “This emphasis on experiential learning is what makes Furman unique,” said Department Chair Dennis Haney.

The goal is to build students’ appreciation for research in all its aspects so that when they graduate they won’t have just knowledge, but training and experience as practicing biologists, he said.

Specific proteins in human cells contribute to the progression of Parkinson’s disease and leukemia when the proteins behave in abnormal ways. Chosed and a group of undergraduate students introduce human proteins into yeast to study how the proteins work in a single cell. The ultimate goal is to identify potential proteins that could serve as drug targets in order to impede the progression of these diseases, Chosed said.

Whether it’s research as part of her genetics lab course or a 10-week summer research experience, “I strive to provide my students with basic lab skills at the bench that will enable them to pursue their research interests,” she said. “I want students to gain confidence in their abilities as future scientists.”

For biology professor David Hollis, his work on the nervous systems of bullfrogs and rainbow trout aims to contribute a small part to the complex question as to why there are such tremendous differences in vertebrate brain regenerative ability.

In his lab, students are looking at the molecular mechanisms that enable adult fish and amphibians to continually produce new brain cells, an ability which is severely limited in adult mammals.

The opportunity to engage students in such research helps them understand and appreciate the role of comparative and evolutionary biology to applied research in modern medicine, Hollis said.

Hollis, along with professors Bill Blaker and Victoria Turgeon, traveled to San Diego Nov. 9-13 with a group of Furman students to present the results of their various research projects at the annual meeting of the Society for Neuroscience.

A unique part of Furman’s biology program brings a number of students outdoors to conduct research in the 1,500-acre Furman Forest near Landrum, S.C. The unique protected acreage has provided opportunities for research on a wide range of topics, including habitat preferences of beetles, comparisons of woody debris and vegetation in streams and response of kudzu to removal treatments.

For Jesse Wood ’14, Ryan Ernstes ’14, and Tori Brenner ’14, preparation began long before they arrived in the field. They learned to identify by sight and sound dozens of diverse birds from the eastern United States, from the tohee to the brown-headed nut hatch.

Equipped with new skills, students measured bird abundance, vocalizations and behavior across the region in agricultural, urban and suburban sampling sites including Furman’s campus and the nearby Furman Forest.

Students, working with professor John Quinn, then used their data to share information on the effects of noise pollution on bird health and to make recommendations to farmers, landowners and city planners on how sustainable land use can benefit wildlife.

Over the summer, Brenner traveled to Nebraska to collaborate with two University of Nebraska-Lincoln students to collect data on the Bell’s Vireo, a tiny grassland bird that weighs less than an ounce. She’s currently analyzing her data to determine the most successful nesting places for the birds, with the goal of conserving nesting habitat.

“I enjoyed every moment of the time I spent in Nebraska,” said Brenner, who plans a career as a conservation biologist. “Through Furman’s biology program, students have countless opportunities and amazing research opportunities.”

Spending a summer in the nearby Furman Forest also confirmed a career choice for Luke Hetherington ’14, who is double majoring in biology and philosophy.

Hetherington, together with Haley Clevenger ’14, worked on several different projects this summer including a kudzu study for The Nature Conservancy, a black bear study for the South Carolina Department of Natural Resources and a study on movement patterns and habitat preferences of carabid beetles designed with biology professor Wade Worthen.

“One of the few guarantees for field research is that there will be surprises and unexpected challenges, and we always had to be aware of everything going on, whether it was rain flooding the pitfall traps, bears relaxing on the trail to the site, turtles in the traps or anything else thrown our way,” Hetherington said.

“The research component is one of Furman’s science program’s best features,” said Hetherington, who is planning to attend a graduate school program in wildlife and conservation biology. “They ensure that you’re working on what interests you.”