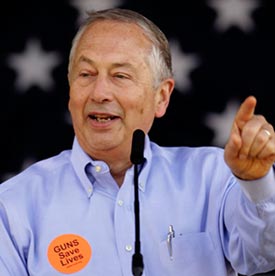 Larry Pratt, executive director of Gun Owners of America (GOA), will speak on the Furman University campus Thursday, Dec. 5 at 7 p.m. in Watkins Room of the Trone Student Center.

His talk, “Tickets to the Gun Show,” is free and open to the public.  It is sponsored by Furman’s Conservative Students for a Better Tomorrow.

Pratt has served for more than 30 years as executive director of Gun Owners of America, a 300,000-member organization that promotes the right to keep and bear arms.  GOA lobbies for the pro-gun position in Washington, D.C., and is involved in firearm issues in the states. Its work includes providing legal assistance to those involved in lawsuits with the Bureau of Alcohol, Tobacco, and Firearms, the federal firearms law enforcement agency.

Pratt has appeared on such national radio and TV programs as NBC’s “Today Show,” CBS’ “Good Morning America,” CNN’s “Crossfire,” and Fox’s “Hannity and Colmes.” He has debated numerous Democratic members of Congress, as well as Vice President Al Gore, on the issue of gun control.  His columns have also appeared in newspapers across the country.

Pratt is the author of Armed People Victorious and On the Firing Line: Essays in the Defense of Liberty. He has held elective office in the state legislature of Virginia, serving in the House of Delegates. He also directs a number of other public interest organizations and serves as the Vice-Chairman of the American Institute for Cancer Research.

For more information, contact Lauren Cooley of Furman’s Conservative Students for a Better Tomorrow at 954-829-3194.