Hanging out at the White House 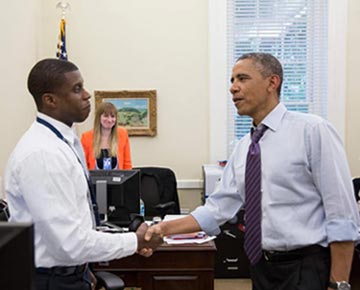 As special assistant to the White House chief of staff, Maurice Owens has the opportunity to work with President Obama. (Pete Souza/Official White House Photo)

Maurice Owens, a 2002 Furman graduate in political science, is currently working in the White House as special assistant to chief of staff Denis McDonough.  Owens started work at the White House under President George W. Bush as a network systems maintenance and audio-visual technician, and then assumed the role of Situation Room communicator under President Obama. Since February 2013, Owens has served as McDonough’s special assistant, which entails executing special projects and assisting with the office’s day-to-day operations.

Owens was recently featured in an article on the BET website